VIOLENT FIRE (2002) - A Review
AKA: DEADLY OUTLAW: REKKA
AKA: JITSUROKU ANDO NOBURU KYODO-DEN: REKKA
Where to start? This film was directed by Takashi Miike. This fact alone was enough to excite me when I found this DVD at an AIDS charity thrift shop in Berkeley. (The fact that it was only a buck was also pleasing.) If you've ever seen one of Miike's films, you know he's a wild, eclectic and talented director. Whatever genre he works in, he manages to put his own distinctive spin on it.
This film, from 2002, is his take on a Yakuza crime film - though you'd be forgiven for thinking it was some sort of insane martial arts-crime-horror-comedy combo if all you saw was the opening five minutes. (See video embedded above. WARNING: It is violent, and crazy.) Sadly, the rest of the movie is not as over the top gonzo great as this opening sequence, but it does manage to maintain an atmosphere of artful confusion throughout the entire film.

Story somewhat takes a backseat to style here, but, in a nutshell, Violent Fire is about Kunisada (Riki Takeuchi), a young man with an extremely short fuse who gleefully takes part in a gang war in order to get revenge against the men who killed his Yakuza mentor. In the end, crime does not pay for Kunisada either, but in the meantime, he's a crazy cyclone of vengeance tearing through the Japanese underworld.

But because this is a Miike film, said vengeance is interspersed with scenes of gangsters having noodles, Kunisada bleaching his hair, a half-spoken, half-sung exposition scene, and other incongruous things. Hey, is that Sonny Chiba I see? Yes it is. Like the opening sequence, this film is jammed full with characters, ideas and images, all colliding and, most of the time, cohering into something resembling a plotline.

Apparently Miike edited the movie to the album Satori (1971) by the Japanese prog-rock band Flower Traveling Band. (They can be heard on the clip above.) Why not, right? And hey, it works. A couple of the guys from the band are also in the movie. Miike's editing here is unusual; sometimes the music drops out from shot to shot, or overlaps the next scene a great deal. Once or twice, the screen went black and silent long enough that we wondered if the film was just abruptly over. Again, style is the thing here. Revenge plots are a dime a dozen, but few are laid out in the cockeyed way this one is. And Takeuchi is just about perfect as the hellbent headcase out for blood. 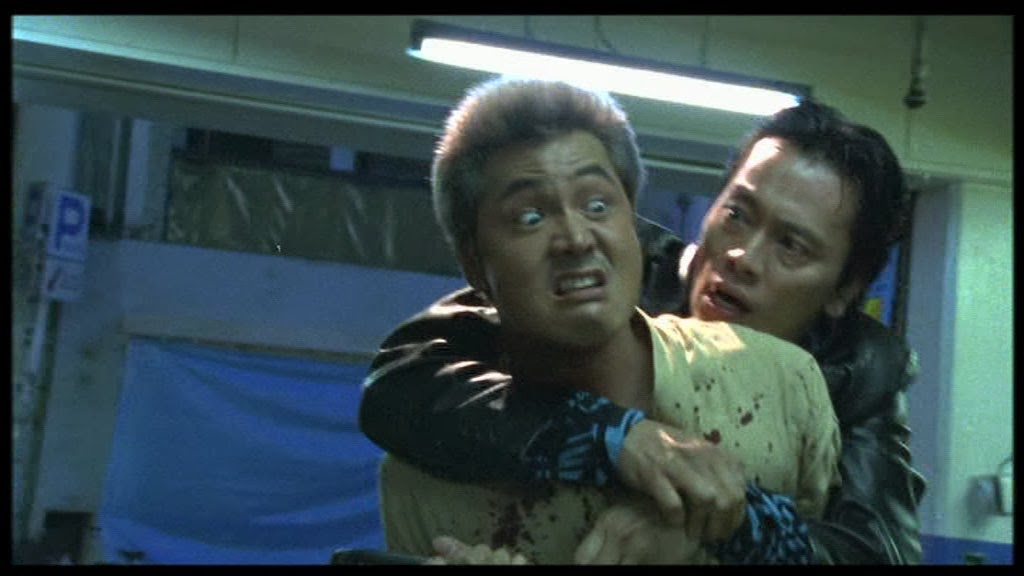 ﻿
Other than saying that I've found things to admire, enjoy and be astonished at in all his films I've seen, there's no real blueprint for a Takashi Miike movie. His international hit Audition (1999) is half lonely guy romance, half full-on horror. The Happiness of the Katakuris (2001) is a comedy about a family that owns a rural inn - and comes complete with singing and dancing zombies and an animated volcano. It's usually a cliché, but with Miike it's true: Expect the unexpected.

So if you're in the mood for something different, or want to see how the creativity of Japanese filmmakers easily eclipses 99% of American film product, you might want to check this out - or check out Miike's work in general. In the meantime, I'm gonna be looking for a copy of the Flower Traveling Band's album.
﻿
Posted by M. Mania at 3:10 PM